Distance learning can be tough given a lack of learning utensils in the home. While trying to navigate, try these two fun chemistry experiments using items you have around the house.

Pour approximately ½ cup of vinegar into a microwave safe bowl. Place it in the microwave for about 15 seconds. Remove the bowl from the microwave and add about 1 tablespoon of table salt. Mix the salt and vinegar until the salt is fully dissolved. Add dirty pennies into the mixture and let sit for two to five minutes. While it sits, watch how the pennies change! Remove the pennies from the bowl and wipe them completely dry. 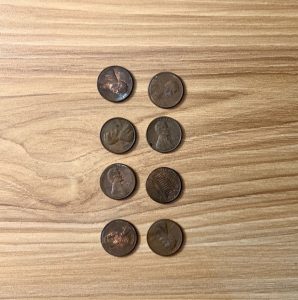 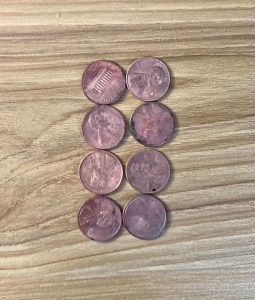 You can watch a video of this experiment here.

The surface of the penny is copper. When copper atoms combine with oxygen atoms from the air, it forms a molecule called copper oxide. This copper oxide causes the pennies to look dull, dark brown or even green. Copper oxide dissolves in the salt and vinegar mixture. This mixture is an acid.

If you rinse half of your pennies in water after the experiment and leave the other half unrinsed, you’ll notice another interesting outcome. The unrinsed pennies will turn a bluish, green color. This is because the copper atoms on the penny combine with the chlorine in the salt creating a blue-green compound called malachite.

Gather three to five different liquids from your house. Here’s some examples: water, juice, syrup, honey, rubbing alcohol, oil, dishwashing soap, rubbing alcohol, etc. Pour out equal amounts of each of your liquids, roughly 1/8 to ¼ cup of each. If you are using two liquids that are the same color (e.g. water and rubbing alcohol), place a couple drops of food coloring in one of them. Take out a clear glass or jar. Pour your liquids in order of how heavy they are.

Additionally, you can take objects from your house like a paperclip, chocolate chip, or raisin and gently drop it into the column. Observe which liquid layer each of these items settle in.

Density is the measurement of mass over volume. Each liquid has its own density. For example, the density of water is equal to 1 kg/m3 while oil is about 0.85 kg/m3. In this density column, liquids with the lowest density sit at the top and the densest liquids are at the bottom.

If you place these liquids in a jar, try putting on the lid and turning the jar upside down. Some liquids will mix, but others will not, like oil and water. You should still see dense liquids sink to the bottom and less dense liquids rise to the top.