3D Printing in Your Library

Most of last year I raised money through grant writing and hosting movie nights and book fairs with one main goal in mind: to buy a 3D printer for the library. Fortunately, after raising money for a few months, I was able to buy a 3D printer! Ever since becoming a librarian, it had always been a goal of mine to have the students be able to design and create something entirely of their own. I am always striving to run a library that offers students as many learning opportunities as possible—a library that equips students for a future in STEM. 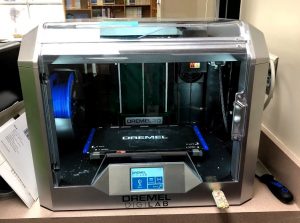 The students were able to use any software to create or download designs. I introduced them to Thingiverse, Tinkercad, or Makers Empire as a jumping off point. Then they could sign up on a Google Form to secure a time to print. When their time came, they started their print job and came back when it was done. It has been a very successful program in the library.

Why would you put a 3D printer in a library?

A library having a 3D printer may seem not normal to you, but it’s more common than many people think. According to the American Library Association, 250 libraries in the United States offered 3D printing for patrons in 2017. STEM pedagogy is becoming exceedingly prevalent and shows no signs of slowing down. Therefore we need to our students to tools that will propel them toward future success. 3D printing encourages high-level thinking to create (or even invent) objects in real life. Why not encourage that thinking in a space that has always allowed for imagination, your library?

How does 3D printing work?

Tinkercad and Makers Empire are two systems that the students can use to design and build anything they can imagine and both systems are extremely user friendly. Thinigverse is a system that allows you to download almost any plan imaginable, including a T-Rex! I have had students use the 3D printer to print useful items like tools, doorstops, screws and a charging stand for a cellphone. I have used Tinkercad, Makers Empire and Thingiverse with 4th-9th grade students and with assistance and I think the younger grades could do it as well. 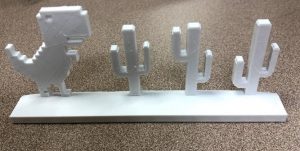 3D printers are great in the classroom or library because guided lessons lead to students’ creations coming to life. In one 3D printer lesson that I hosted in my library, students researched and wrote a paper on different items in the Smithsonian and then printed the item to present their findings with. In another instance, I helped a teacher whose students were researching a person they felt deserved to be placed on Mt. Rushmore. Those students then printed Mt. Rushmore with that persons face on it!

There are so many different possibilities to tie in 3D printing into your regular lesson plan. Don’t be afraid to dive into 3D printing, even in your library!

Interested in 3D Printers for your classroom or library? Check them out here:

About the Author: Jessica Fitzpatrick

Jessica Fitzpatrick is a middle-school librarian and is in her sixth year of education. She holds a Bachelor of Science in elementary education from the University of Houston and a Master of Library and Information Science from the University of North Texas. She enjoys running, reading, and spending time with her two daughters and husband.