Breaking Down the Buzzwords: Modeling and Phenomenon-Based Learning

In education, especially STEM education, teachers often find themselves face-to-face with jargon. In the first part of my “Breaking Down the Buzzwords” series, I explored inquiry and project-based learning. In part two, I will break down two more STEM buzzwords: modeling and phenomenon-based learning. Let’s dive in to see what these ideas look like in the classroom.

It is another practice emphasized by the Next Generation Science Standards, NGSS. The standards state that “scientists use models to represent their current understanding of a system (or parts of a system) under study, to aid in the development of questions and explanations, and to communicate ideas to others.”

Modeling can look like a lot of things, but it is most applicable to STEM when students are representing micro-level concepts. For example, I use modeling when I talk to my physics students about circuits. They can’t see the electrons flowing, so we act out that flow to give them a model to recall this information. We can then continue to use this model as we explain more complex circuitry.

What is it not?

Modeling is not always building something. Often, we hear the phrase “build a model” and that can be intimidating. However, modeling is most often creating a way in which to view tiny or massive processes (i.e. on the scale of atoms or stars) without the use of expensive materials (micro/telescopes).

How can I try this tomorrow?

An easy way to implement modeling is to have students “act out” micro or macro scenarios. This can involve physically acting out a situation, but it can also be a smaller scale activity. I once saw a teacher have students write letters from one element to another. They are still modeling the interactions between these elements, but it doesn’t involve the kind of planning and preparation that a full class participatory act might. Don’t rule out creating models either. Building a model to show scale is an interactive way to ensure students understand a macro or micro scale concept.

This strategy is a newer one in STEM education. Unlike project-based learning, phenomenon-based learning starts with an observed phenomenon. NGSS states, “Natural phenomena are observable events that occur in the universe and that we can use our science knowledge to explain or predict. The goal of building knowledge in science is to develop general ideas, based on evidence, that can explain and predict phenomena.” It is important show the phenomenon before the students have the words to explain it. This allows students to address misconceptions as they learn a stronger vocabulary. 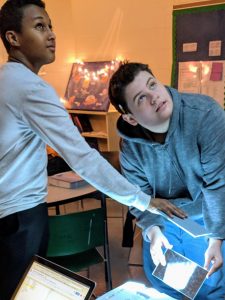 Students should be engaged. They should be “ooh-ing and ahhh-ing” and asking “can you do that again?!”

What is it not?

It is not project-based learning. While they share similarities (prioritizing real-world situations), phenomenon-based learning doesn’t require extensive preparation. This makes it easier to implement on a smaller scale throughout a unit.

How can I try this tomorrow?

The best way to implement phenomenon-based learning is to swap the traditional method of STEM learning. Instead of presenting vocabulary and introductory information via lecture, homework, or textbook reading, present the students with a phenomenon. Often, we do these in the opposite order. If you already have a lesson that has vocabulary and then a phenomenon, just swap the order! Make sure it is an attention-grabbing phenomenon.

Overall, it can be easier to implement these seemingly daunting tasks than you may realize. Take it one step at a time, try little applications first, and don’t give up if everything goes terribly wrong. These things take time, patience, and iterations. Remember: You’ve got this!

See Savannah’s other implementations of the Breaking the Buzzwords Series:

Breaking Down the Buzzwords: Inquiry and Project-Based Learning

About the Author: Savannah Lodge-Scharff

Savannah Lodge-Scharff is a high-school physics teacher in the Boston Public Schools. She is originally from Maine, completing her undergraduate degree in physics from Colby College, and her Master of Science in Teaching from the University of Maine, where she met her husband, Alex. She began teaching in Massachusetts in 2014, after spending a year in outreach education at the Museum of Science in Boston. Her professional interests include project-based learning, restorative justice, trauma-informed practices, and technology integration. Her personal interests include visiting micro-breweries and following New England sports teams. She currently lives in Roxbury with her husband and two dogs, Pythagoruff (Pi) and Schrodingerrr (Rho).