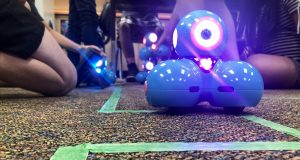 If you have ever scrolled through my Twitter feed, you might be under the impression that I am a pedagogical creative genius. (The funny thing is that I’ve been called that before.)Although I’d love to assume such a rad title, I’d be remiss to accept such praise without giving credit to the true masterminds and expert learning architects.

See, the most meaningful learning experiences (i.e., that transpired in my classroom and were subsequently highlighted on my social media account) were derived from communicating and planning together with…my students. As I’ve previously mentioned, student voice is heard and accounted for when designing learning segments in my classroom. I want my students to develop agency as they take responsibility for their own learning. But what does this look like on a day-to-day basis? 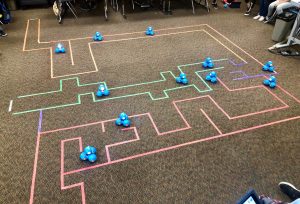 A few months ago, I was looking at the California Computer Science Standards and brainstorming a way to differentiate the learning process while using Dash and the block-based coding app, Blockly. I knew I could use the Learn to Code Challenge Cards to accomplish this goal, but I also wanted to create my own personalized learning experience with my students. The idea of designing a maze that was inclusive of all my learners and their needs sounded incredible. I just wasn’t sure how it would work and if the maze could support my vision.

“Mr. Arevalo, Why Don’t We Make the Maze with Different Levels?”

As students worked on their assignments for the day, I was engaged in some serious higher order thinking that caught the attention of one my most curious students. Apparently, my inner thoughts were expressed outwardly through my facial expressions that day. I must have looked like one of those “thinking” emojis.

My student quietly approached me to ask if everything was okay. I explained my idea to him, and his response was simply brilliant. “Mr. Arevalo, instead of having one big maze (my original idea), why don’t we make the maze with different levels like a video game (e.g., easy, medium, and difficult)? That way, everyone can start at the level they want and then move to the next level when they feel comfortable. We can connect to this to SDG 10 and make sure everything is fair for everyone.” (We had just completed a unit on the UN’s Sustainable Development Goals. Coincidentally, we had focused on SDG 10 – Reducing Inequalities. His connection and ability to understand this concept was beyond inspiring.) I presented his idea to the rest of my students, and the deeper learning really ignited. 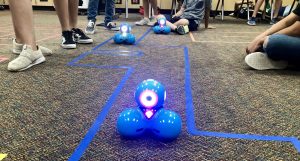 “Mr. Arevalo, we can create the maze so that no matter what level you start at, you can end at the same place as everyone else.” In my head, I couldn’t help but think this was differentiation at its finest, student-centered and student-created. I was getting excited; I just had to figure out the details of engaging in such a comprehensive process. What would this look like, what roles would students have, what materials would I need? I definitely wasn’t prepared for the depth of learning that would eventually transpire.

Everyone Has a Role 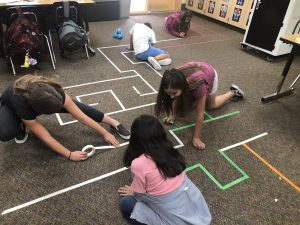 Designing a maze with varying degrees of complexity would be challenging, but my students and I were fully committed to bringing our vision into reality. As we began this process, students got to pick their own roles. They could also switch their role if it turned out to not be an ideal fit. For example, some students worked on developing the complexity for each level (i.e., ensuring validity of ease/difficulty).

To do this, different angles were created, paths were thinned or widened, parallel lines and perpendicular lines were inserted, etc. Students were extremely creative as they walked around with meter sticks, rolls of masking tape, and blueprint sketches on neon green Post-it Notes. We also had maze testers that were maneuvering Dash through the levels as the tape was rolled out. This group would then give real-time feedback to the students developing the complexity of each level.

One of the other main roles consisted of color-coding the maze to help identify the different levels of difficulty. Unfortunately, I didn’t have colored masking tape. Luckily, I had a group of students willing to color the tape to mark the levels. I even had soft music in the background. It almost felt like there was a social-emotional component integrated as students relaxed and colored with purpose. At one point, I even got down on my own knees and enjoyed the mindfulness of coloring and taking a much-needed mental break. 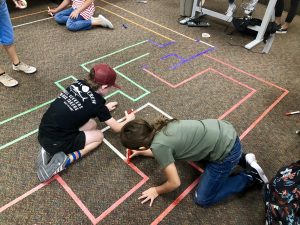 It made sense to turn this experience into a whole-group design challenge as well. This happened organically because we had an authentic and relevant problem we needed to solve. I began by highlighting the role of empathy and what our purpose was in doing this in the first place (i.e., creating an equitable opportunity for students to code with Dash).

Then, I moved to defining the problem and we collectively identified items that would need to be considered and planned accordingly for (e.g., space, maze levels, materials, etc.). From there, we engaged in the ideation process as we brainstormed a wide variety of different solutions.

Subsequently, we moved into the prototyping phase, where we spent a large portion of our time. Tape was rolled out and then peeled off on more than one occasion because of different issues. For example, one level was supposed to be easier than the others. It turned out to be more difficult than anticipated. Thus, the problem was discovered by the maze testers and the path was corrected.

Then, we had to figure out a way to get multiple students to be able to use Dash in the maze at the same time without having any collisions. Having to wait your turn proved to be the root of some disruptive behavior. So, within the individual levels, we added multiple starting points that would still lead to one singular end point.

Finally, we launched our maze and tested it out by allowing students to code Dash using Blockly. By that time, we had gone through enough iterations that we didn’t have to change much. Students became true maze runners as they Dash(ed) through different obstacles. This was one of the most empowering experiences that has ever transpired in my classroom.

Want Dash in your classroom? Learn more about him and the rest of the Wonder Workshop Coding Robots: 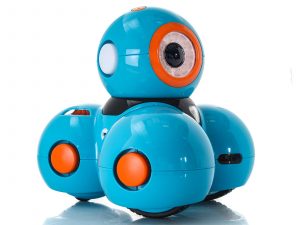 About the Author: Andrew Arevalo

Andrew Arevalo is a fourth-grade teacher and member of the Ed. Tech Team at McCabe Union Elementary School District in El Centro, California. Andrew holds a Master of Education in curriculum and instruction. He is the recipient of the 2019 CUE Emerging Teacher of the Year Award and a finalist for the 2019 CUE LeRoy Finkel Fellowship. Andrew is passionate about leveraging blended learning, the power of play, and design thinking through STEM-related experiences to support and ignite student curiosity.