The Science Behind 3 Kid-Friendly Space Books

As a child, I wasn’t an avid reader. It was only in college that I discovered a love for reading and realized what I had been missing. If you’re lucky enough to have bookworm at home, you may find them finishing one book and jumping to the next. In a time where students are at home instead of in the classroom, why not combine  reading with science? Here are three kid-friendly, space-themed STEM books and the awesome science behind them.

The Countdown Conspiracy by Katie Slivensky 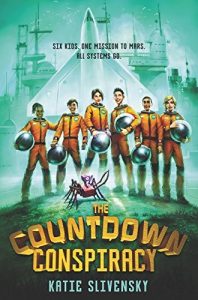 Six middle-school aged children are selected for a future mission to Mars. Each of these students has their own field of expertise ranging from computer science to aerospace. The narrating character, Miranda Regent, is a robotics expert, having designed her own “mechbot” named Ruby. As soon as Miranda is chosen for this mission, she starts to receive cryptic and threatening messages. Now the entire mission is at risk and it’s up to Miranda and her team to save it.

I would describe this book as The Martian for children. Like The Martian, this book was heavily researched before publication and the STEM themes throughout are anchored in fact. The author, Katie Slivensky, is a science museum educator and translates her love of educating students onto the pages within this novel. The cadets in this novel also have varying passions in STEM fields including computer programming, robotics, and engineering, allowing the audience to easily identify with these characters. Readers who like this book may also enjoy Slivensky’s The Seismic Seven.

As an aside, I had my previous middle school students read this during a two-week summer STEM camp. One girl loved it so much, she read it multiple times in two weeks. That’s how good it is!

The Transall Saga by Gary Paulsen 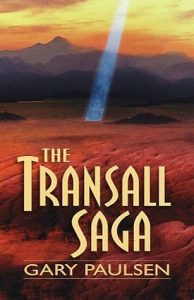 When 13-year-old Mark Harrison falls into a mysterious blue light, he wakes up in a strange world unlike his home on Earth. He encounters human-like beings who take him in to their tribe and, over time, he learns their language and culture, all while wondering how he can get back through the blue light to Earth.

This is a book for your students at home who have asked, “Do aliens exist?”. It paints a picture of what a world like ours could look like and how we might interact with an alien species. This book challenges student readers to think about how surviving on Earth would be different than surviving on an alien planet.

All Summer in a Day by Ray Bradbury 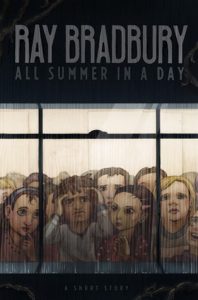 This futuristic short story follows a colony of humans on Venus.. It is always raining on Venus, but every seven years, there’s one hour of sunlight. This story follows Margot, a 9-year-old who fondly remembers sunlight from her time on Earth while her classmates have forgotten.

Like The Transall Saga, this paints a picture of what it would be like to live on another planet, except this planet is a lot closer to home. Scientifically, the weather on Venus is known to be unpleasant. With its incredibly thick atmosphere and extreme axis tilt, weather is unpredictable. The surface of Venus endures high temperatures, intense air pressure, and many lighting storms. It also rains sulphuric acid making it an unhabitable environment.

This book was published in 1954 before many of the weather conditions on Venus were known by scientists. As an activity, students can look at the differences between Bradbury’s predictions and what we know now. I would also recommend looking into Bradbury’s other books like Fahrenheit 451 and The Martian Chronicles.

Got movie lovers at home? Check out this article on the science behind kid-friendly movies for Elementary students and movies for Middle School to High School students. Also, what other kid-friendly science-fiction books do you recommend? Let me know in the comments below!